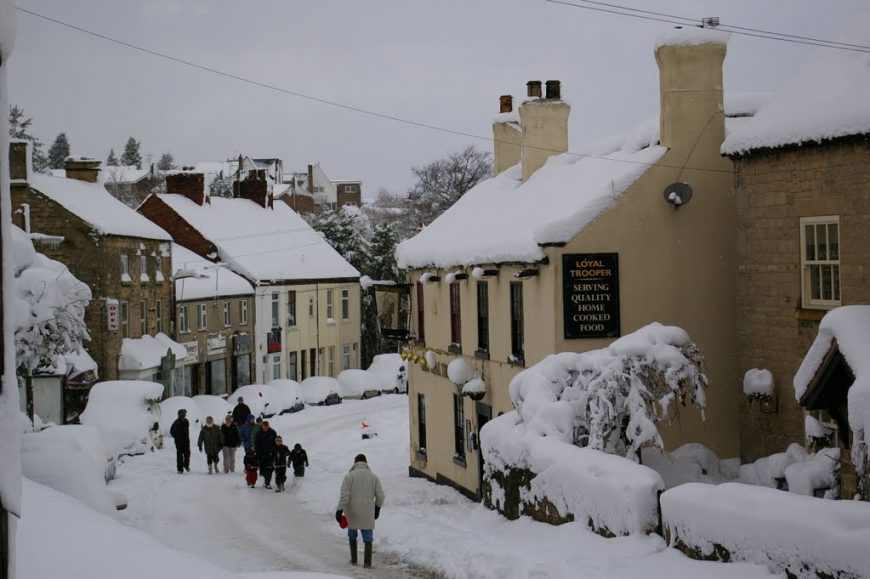 November 30th 2010 started out like any other Tuesday at the end of autumn. Shortly after lunch the first few flakes of snow began to fall. Again, nothing unprecedented for that time of year in South Yorkshire. But this was no ordinary snow shower.

The snow got heavier and heavier, and very soon even the busy A57 was starting to get a covering of snow. By 5:30 that afternoon the road had become unpassable. When South Anston awoke the following morning around 60cm of snow had fallen. Experts would later inform us that our village had been hit by a snow bomb

A small group of local residents and church members realised the size of the problem on our door step, and immediately opened the doors of the church hall to drivers who had been stranded over night. What started out as a place to get warm and have a hot drink soon became the command centre for a major incident operation. With more than 100 vehicles and their occupants stuck in the snow, the decision was taken to deploy Mountain Rescue teams from Calderdale, Edale & Woodhead to the gentle rolling hills of our village. Wayne Thakery of the Woodhead Mountain Rescue picks up the story:

“The radio kicked into life and it was our controller in the Peak District. He said ‘Can you go to Anston – there’s a report of some trapped drivers.’

“When we got to A57, we were saying we can’t see any major problems – just one or two vehicles – and then, when we reached the Red Lion at Todwick crossroads, it was ‘Oh my God’.

“There was one lane clear and we had to drive on the pavement because you couldn’t see where the road was because of the snow. It was like someone had pulled a big white duvet across the road.”

“We must have gone about two miles, almost into the centre [of South Anston], and we’d still not reached the end of the stranded vehicles. We ended up having to do a search operation to make sure people weren’t left in the vehicles. We had a search dog from Edale Mountain Rescue to make sure no one had got out of their vehicle and then collapsed in the snow.”

Sergeant Suzanne Snowden from South Yorkshire Police was one of the officers sent to deal with the growing emergency. She praised the way local people had already sprung into action, setting up a relief centre in the Methodist Church Hall for stranded drivers, even before the professionals arrived:

“I think the community of Anston performed in an absolutely marvellous way, a real testimony to human compassion. We had members of the community coming down with their names and addresses, saying ‘I’ve got two beds available in my house and shower facilities if any of the drivers want to spend a warm comfortable evening with us’.

“We had young people from the village going around with little sleighs, knocking on doors asking for donations of food, clothing and blankets. They were absolutely brilliant.”

As well as the drivers stranded on the main road, people living in outlying areas were struggling with the snow.

Wayne Thackray and his team, now assisted by colleagues from Edale and Calder Valley Mountain Rescue, went into action again.

Wayne remembers one case where a mother and her young family had been without heating for four days because supplies of bottled gas had not been able to get through:

“We put a big bottle of gas in the landrover and took a gas engineer to the house. When we got there, there were no footprints, no vehicle tracks. It was clear no one had moved for about two days. The snow came up to my thighs and I’m 6ft 1in (1.85m) tall.”

After 3 days the rescue services, helped by local farmers in their tractors, managed to get the road clear, and before long everything was back to normal.

As a mark of their thanks South Yorkshire Police awarded 8 commendations to some of those involved in the operation, including an award for our church. It hangs proudly on the wall in the Community Hall.

What an extraordinary week that was and the way the community sprang into action was an example of self help and everyone pulling together!