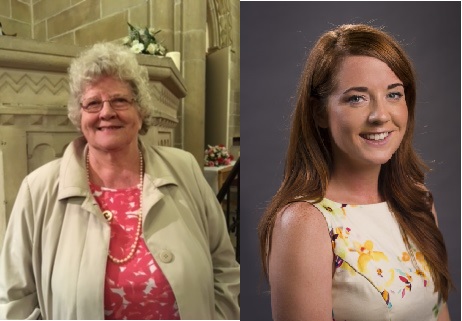 This year we celebrate an incredible double whammy in the Queen’s Birthday Honours List. Jackie Scott & Ruby Smith have both been recognised with MBE’s for their work with the community in South Anston and the surrounding area.

Jackie, who has worked tirelessly for National Children’s Home & Action 4 Children for many years, has been honoured for services to children.

As well as her work for these charities, Jackie is an integral part of the church, taking part; supporting and actively encouraging people to get involved. There are few church activities that Jackie hasn’t been part of in some shape, way or form. She also sat on the Board of Governors at Anston Hillcrest for over 40 years, and is a familiar face in the school, and around the village.

Ruby, who at 26 years old, is one of the younger recipients of the honour. She receives it for Charitable Fundraising for Young and Elderly Vulnerable People.

At the age of 16, Ruby started fund raising on behalf of Unicef, going on to be an ambassador for them. Then Ruby, with the support her family and friends, decided to start Crackers & Co., sacrificing their own family Christmas to cook dinner for those, who otherwise, would have spent this special day on their own. They now cater for over 100 people. Not satisfied with making one day a year special, they also host an afternoon tea on Easter Sunday.

Ruby’s charitable nature doesn’t stop there either. She works for a local housing charity, and helps children who find themselves needing a step up in life.

Both these ladies are truly remarkable, and very deserving of the recognition that they have received. Hopefully they can inspire us all to go the extra mile.

I just want to say thank you to Jackie for the work she did when I lived in S Anston 1970-76. I used to go to Monday Club with my brother and sister and all the other kids.
I became a Christian in 1993 and I often recall some of the influences on my life that led me there.
God bless you and thank you Jackie xx